benshepard (at) mindspring (dot) com
“Participate in any action in New York, and you’ll have a strong chance of coming across Benjamin Heim Shepard. For thirty years, this big, rugged, brown haired guy with the look of a leading man has been in all the battles. He protested for bike lanes, community gardens, with drug users, against the pharmaceutical industry….
Some people practice sports every day. Benjamin protests every day. “Every day,” he says, as if he’s delivering the secret of youth. “
-Mathieu Magnadeix, Generation Ocasio-Cortez, Les nouveaux activists américans
Biography 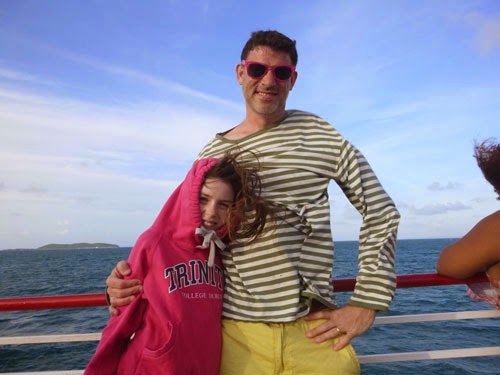 On the way to Vieques


Benjamin Shepard, PhD, is an Professor of Human Service at New York School of Technology/City University of New York. He received his Masters at the University of Chicago School of Social Service Administration, PhD at the Graduate Center of the City University of New York, and training in psychoanalysis from the William Alanson White Institute of Psychiatry, Psychoanalysis, and Psychology in their Intensive Psychoanalytic Psychotherapy Program. As a social worker he worked in AIDS housing settings from San Francisco to Chicago to New York, where he directed the start ups for two congregate housing programs for people with HIV/AIDS, as well as served as Deputy Director at CitiWide Harm Reduction..

Much of Dr. Shepard’s scholarship is based on the ethnographic study of social services and social movements. He is the author/editor of six books including White Nights and Ascending Shadows: An Oral History of the San Francisco AIDS Epidemic (Cassell, 1997) and From ACT UP to the WTO: Urban Protest and Community Building in the Era of Globalization (co-edited with Ron Hayduck) (Verso, 2002). The latter work was a non-fiction finalist for the Lambda Literary Awards in 2002.

Recent works include:
Part two of this study on play: Play, Creativity, and the New Community Organizing (Routledge, 2011), Queer Political Performance and Protest (Routledge, 2009),The Beach Beneath the Streets: Exclusion, Control, and Play in Public Space (co-written with Greg Smithsimon) (SUNY Press, 2011) and Community Projects as Social Activism (Sage).

He got his start writing music reviews for Detour and profiles for the Bay Area Reporter in the early 1990s’. In 2010, he was named to the Playboy Honor Role as one of twenty professors “who are reinventing the classroom.”

A social worker, he has worked in AIDS services / activism for two decades, joining ACT UP Golden Gate in the early 1990’s, opening two congregate facilities for people living with HIV/AIDS, serving as deputy director for a syringe exchange program, all while remaining active in efforts to bridge the gap between direct action and direct services.

Trained at the University of Chicago School of Social Services Administration, the City University of New York Graduate Center, the William Alanson White Institute of Psychiatry, Psychoanalysis, and Psychology as well as through collaboration with some of the most powerful organizers and movements of this era, Shepard combines these experiences to frame his work.

For more on Ben, see his academic profile
http://www.citytech.cuny.edu/faculty/BShepard
and a few interviews.
http://benjaminheimshepardplay.blogspot.co.uk/p/interviews.htm

He is available for consultation, coaching, and counseling services at a sliding scale.
Please contact him at benshepard (at) mindspring (dot) com
Home
Subscribe to: Posts (Atom)