“A deeply moving, vivid, funny, tender, sexy, rough-around-the-edges memory novel of early-nineties San Francisco when AIDS was claiming lives but also when sexual, cultural and political walls were falling and everything seemed possible.”

"Shades of Brautigan and Kerouac in this pacy debut of poetic appropriation, sexual politics and clumsily channeled adolescent angst. Though character-driven at its core, the novel reads like a blast of reportage, as if birthed whole from collected experience."
- Rob Magnuson Smith, acclaimed author  of the Scorper and  the Gravedigger 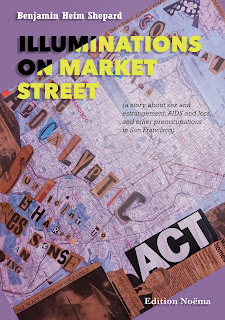 Illuminations on Market Street  is a heartbreaking, bitterly funny, and revelatory look back at a time of crisis in San Francisco, at the height of the AIDS crisis. This roman à clef proves the personal is political. It was written with great insight and punishing honesty by veteran social justice and queer activist Benjamin Heim Shepard. Shepard mined the contents of a personal journal from 30 years ago to create a slightly fictionalized saga of a city under siege and the souls in freefall who populated it.

It is 1992, San Francisco. Cab Callaway Hardy is a recent college graduate, budding street activist, journalist, horndog romantic, and restless idealist. He is living in the Haight and working the graveyard shift at an AIDS residence at 1994 Market Street. Death has a stranglehold on the place; people pass away every week during this height of the epidemic, before the arrival of the lifesaving AIDS cocktail. Cab tries to make sense of it all, between punk shows, protests, and difficult relationships with a number of women amid the changing rules of 1990s sexual politics. Slamdancing through it all, Cab reflects back on a troubled childhood amid the picture-perfect family, confronting memories and reckoning with deep losses along the way.

“I’ve known Benjamin Heim Shepard for a long time. And I never wanted to know much about his sordid sexual misadventures during the time of our friendship in the early 1990’s in San Francisco. Apparently, I was remiss. It makes for a fantastic read that everyone can enjoy.”


—Cleve Jones, creator of the NAMES Project AIDS Memorial Quilt and author of When We Rise: My Life in the Movement


Only Benjamin Shepard, who links personal narrative and movement analysis with uncommon felicity, uses his own experiences to significantly deepen his article's insights,
- Geoffrey Kurtz for Logos, Logos 2.4, Fall 2003 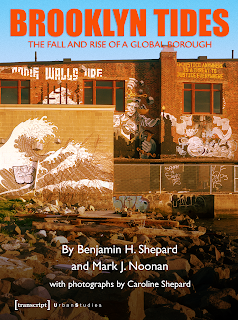 Brooklyn Tides: On the Fall and Rise of a Global Borough. With Mark Noonan. 2018
Berlin.  Transcript Verlag.

We’re all Alright: Twenty-One Arrests and a City of Friends. Common Notions. In Press.

From ACT UP to the WTO: Urban Protest and Community Building in the Era of Globalization
New York: Verso Press, 2002.
Ben Shepard and Ronald Hayduck editors.


About White Nights and Ascending Shadows from (The Guide, Summer 1998).

“History not only moves quickly--it is, in essence, what happened yesterday--but it is also quickly forgotten. This is especially true when many of the people who made it are gone or dying. Benjamin Heim Shepard's beautifully composed, and wonderfully moving White Nights and Ascending Shadows: An Oral History of the San Francisco AIDS Epidemic is a fine and telling history of how one city faced--and still faces--the endless effects of AIDS.

“Based in interviews and oral histories with 30 people with AIDS, Benjamin Shepard manages to piece together more than three decades (1968-1998) of gay male life and culture. The interviews here chart not only the progress of AIDS in the gay community, but document the many manifestations of gay culture that occurred before and in response to the epidemic. Alternatively brave, fragile, furious, and mournful the men interviewed here speak their minds and force their visions and politics upon us in unforgettable ways. As a cultural, political, and medical history, White Nights and Ascending Shadows is an important book, and the men who speak throughout it are determined that we remember who they were and what they did to preserve their lives, their families, and their culture.
-Michael Bronski